Beijing Daxing Airport to Be a Star Attraction

The new gigantic star-shaped Beijing Daxing International Airport(PKX), due to open by Sept 30, will have its domestic and international departure halls stacked vertically.

The new gigantic star-shaped Beijing Daxing International Airport(PKX, Airport Code Search), due to open by Sept 30, will have its domestic and international departure halls stacked vertically. This is the first such design among global airports, and will offer passengers more convenient and faster check-in and transfer services, its designer said on Tuesday.

Given the terminal's centralized design, the distance between the central area and the farthest boarding gate will be 600 meters of walking distance at the maximum, much less than many other Asian and European terminals, and the speed of baggage reclaim will be faster, said French firm ADP Ingenierie, the architectural designer of terminal 1 of Daxing airport.

Located 60 kilometers south of Beijing's city center, the new low-carbon airport is expected to serve as China's largest integrated transportation hub and one of the largest worldwide. More than 50 domestic and foreign carriers have shown interest in operating flights from there.

Building of the infrastructure of the new airport has been completed. Terminal 1 will have an annual capacity of 45 million passengers at its opening, which will be able to meet the transportation demand of the upcoming 2022 Beijing Winter Olympic Games.

"The new airport(Air Cargo Tracking System) requires a lot of compact aircraft parking stands and gates, and as such required us to break with the traditions of designing modular terminals that spread horizontally," said Jean-Charles Content, lead architect of Asia-Pacific of ADPI.

"So we designed a compact single terminal, and it didn't require rapid transit trains for now. Later, when the passenger flow will be expanded to 72 million annually, a rapid transit system is required, and the space has been reserved," he said.

Passengers can easily find their way within the open interior layout of the terminal, with restaurants and shops located around the central area with a skylight. Besides, there are five ancient Chinese style gardens with distinctive features located at the end of five departure lounges for passengers to take rest and wait for their flights, the designer said.

Meanwhile, China Eastern Airlines, which will move to the new airport along with China Southern Airlines(CZ, Air Freight from China), earlier said that it has proposed plans for off-airport check-in and bag drop services to the airport authorities, and related equipment is expected to be built at several places such as metro stations in the city.

"Remote self check-in facilities will be established at the connecting deck of metro stations and terminals, and they will start operations once the airport opens. Remote baggage check services will be introduced at a later time," said Yao Yun, deputy general manager of the global baggage control center at China Eastern Airlines. 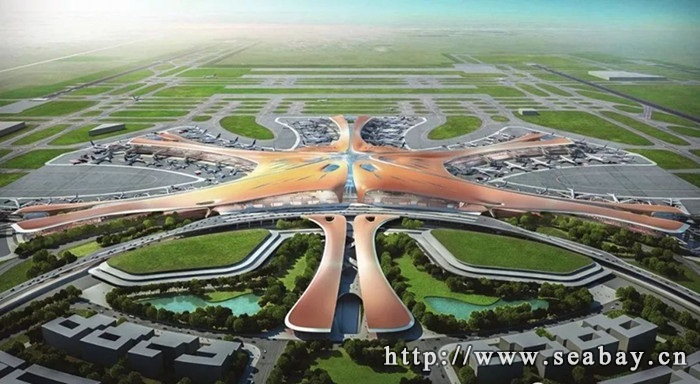 Please login WeChat on your mobile and scan below QR Code to find us.(You will have to download WeChat Apps on your mobile first if you don't have this application.)

Sorry, we don't like interrupting like this, but we have to do it to stay out of trouble ☹